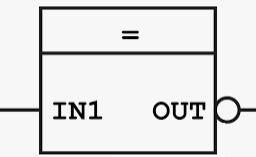 What is Function Block

A function block is a POU (program organization unit), which returns one or several values when executed.

It is similar to a class in any programming language which can be instantiated and executed with a different value.

Function block in the structured text has a similar meaning. Let’s say we have 20 similar pumps in our plant. If we want to model these pumps then we can create 1 function block and then make 20 instances of that function block. So we don’t need to model 20 times. It is similar to class in C++ where we can make an instance and give the input  and get the output.

Methods are an extension of the IEC 61131-3 standard and a tool for object-oriented programming that is used for data encapsulation. A method contains a declaration and an implementation that includes a series of statements. However, unlike a function, a method is not an independent POU, and it is assigned to a function block or program. You can use interfaces for the organization of methods.